I’ve been having pulling and chest pains off and on for some time (usually the worst pain during/after swimming or crazy upper body workouts). I’ve ignored it and kept telling myself it’s the “new normal”. Last July, I saw my doctor for a lump on my left side. He aspirated me (stuck a giant need in me) thinking it was an “oily pouch”, and told me to come back if the lump got bigger. The lump has gotten bigger and been causing some pain in my chest/sternum when touched or after an extensive workout.

If I were to be completely honest, my worst fear was my doctor telling me Friday I needed to see my breast surgeon and have a biopsy done considering where the lump is. Sometimes the mind goes to dark places and I should know better! The lump is  between my boobs, and kinda sitting between my implant and chest cavity/sternum. I still have a 10% chance of getting breast cancer. There’s plenty of women I’ve spoken to that still were diagnosed with breast cancer after a prophylactic double mastectomy. My oncologist told me in December about a few cases she’s personally seen. I’m turning 29 this year, and have my fears/moments. Trust me, I just don’t vocalize or show it! Sarah was 29…need I say more…

Anyway…10 months later, I saw my doctor again and he confirmed I have some scar tissue formation and fat necrosis going on. The only option I really have is surgery. He’d go in there to clean things up, do another round of fat grafting and go from there. Sounds easy, right?

What is fat necrosis?

According to all the websites I’ve been on, fat necrosis is benign or non-cancerous condition that happens after surgeries; primarily breast surgeries or injury to the breast. Necrosis literally means death of living cells and presents itself as a hard lump.

I had fat cells taken from my stomach and transferred to my chest area. My left chest had the most work done, with three different transfer incisions/marks. I also have some major rippling going on, to which I found out the reason why on Friday. Rippling usually takes place in larger women or when the breast tissue is completely scrapped out. My doctor told me that some breast surgeons scrap as much breast tissue out (duh, right? That’s the point), and as a result the skin is really sheer and rippling happens. My breast doctor told me that one side was being difficult and she left a little more tissue than she normally does. This could be why my right boob looks fine and doesn’t have rippling. My left is another story now that things have settled. My plastic surgeon told me that other breast surgeons he works with leaves a little more there, and he doesn’t see much rippling with those patients. I’m not faulting my breast surgeon by any means. I’m not upset either. I knew rippling could be a result of implants and no longer having breast tissue. I have no complaints, I love my breast surgeon and thankful she did my surgery.

Problems With Another Surgery: 1.) He can’t do fat grafting from my belly due to the nerve damage caused from the exchange/fat grafting surgery… 2.) I don’t have enough fat in my love handles. I’m thinking he clearly didn’t have his glasses on because there’s plenty of jiggly there. If there’s not enough jiggly there, he’ll have to go to my thighs; which he already admitted he wouldn’t get much, it’s all muscle there….3.) The recovery could potentially be longer and yield more complications… 4.) As a result of potential complications, I could maybe lose my left implant for a period of time and I’d need another surgery to put one back in (too much to get into)…5.) Insurance being buttheads. 6.) Don’t want to mess up my tattoo! Yes, I know…petty!

There really is no good time to do surgery. Let’s be honest. There’s no good time for anything major in life to happen, but it happens and I just have to roll with the punches. I have plans and races I’ve committed to, and really don’t want to “start over” athletically. I get this news when I’m in the process of starting to work with a running coach because I have goals and plans for fall races. Whatever. Such is life, right? It doesn’t go as planned. And quite frankly, monkey wrenches happen all the time. PLOT TWISTS, right?!? Keep inking on (https://fightingpink.com/2015/09/29/keep-inking-on/). Do I push through things and enjoy my summer (do more “damage”, not really) to my chest, and push off the surgery?  I could very well do nothing and learn to manage it for the rest of my life. My doctor told me I’m young and should move forward with it no questions asked but, see number 5 above.

It’s a lot to process, but completely out of my control. I have some time to make a decision, and some things or hinging on other things. I’m not worried (okay, maybe a tad bit), and just figuring things out. I’m going to continue processing, researching  and analyzing things, and weighing the pros/cons…all while getting ready to start marathon training 🙂  Yeeee!!!! I’m excited for this one.

One day at a time, right?!? Everything happens for a reason, whether I know now, down the road or never know why. I’m going to continue moving forward all while smiling, laughing and being joyful. 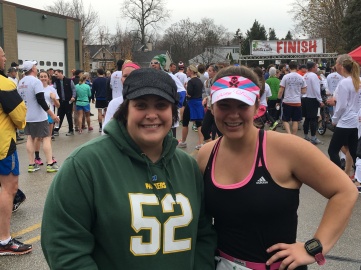