I haven’t laced up in well over five weeks. I literally came off from the marathon in the fittest shape I’ve ever been in my entire life. I lost 7 pounds, toned up and found my purpose. I’ve searched for my “athletic” purpose through various sports in the last few years, and found it this year when I solely focused on running.

Back in October, I was in my doctors office for a pre-op appointment. My doctor randomly decided to run a few additional tests. She said she normally doesn’t do these tests, but just had a feeling. I was left in the room waiting and waiting. The next thing I know they’re placing electrodes all over my body and running wires here and there. The lady didn’t like what she saw and quickly left. She came back in and did another test. My doctor came back in the room concerned with the results. She spent a great deal of time listening to my heart…

I left freaked out to say the least.

Over the next few weeks, doctors and surgeons went back and forth about whether or not surgery should proceed because of my heart. I was extremely stressed and anxious with the unknowns! My surgeon was extremely concerned with putting me under to operate.

Back in May I met with my plastic surgeon regarding a lump, some pain and issues. We decided to move forward with surgery to clean things up and transfer fat up to my chest to fill in areas. As much as I didn’t want to go under the knife, I knew it needed to be done.

I didn’t do the ultramarathon at the end of October, and had the surgery instead. I had my moments leading up to it because of the fears and unknowns. I was told to expect more pain from this fat grafting based on where they would take it. Because I lost a lot of weight from the previous time I saw my surgeon and had no fat on my stomach or legs/thighs, his only option was to make incisions in my lumbar area and take fat from there and my hips. I was worried when he looked at me concerned and unsure of where he was going to get the “fat”. Trust me — there’s plenty to take.

Dr. S. started the surgery with me on my stomach, made two incisions in my lower back/lumbar area, stuck a needle and crap in me to suck out the rolls, spun the fat, rolled me over, cleaned up the problem areas, transferred the fat to my left breast and filled in areas on my right to balance it out.

The lumbar incisions were pretty deep but are finally healed and no longer hurt (unless I sit for too long). My hips took the brunt of the bruising, because of how much they had to take and transfer. My chest no longer has the random pains from pulling and crap. The bloating and swelling in my belly and hips is going down (yay!). At least this time around I don’t look 5 months pregnant. It’s exciting – I FINALLY have cleavage. Honestly, I wish I did the surgery sooner but was too stubborn and scared!!

With that being said, I’m back to life and excited to start running again. I can’t wait to build mileage again and chase after some new personal bests.

PS: don’t worry. I’m following all orders by doctors and not overdoing it. 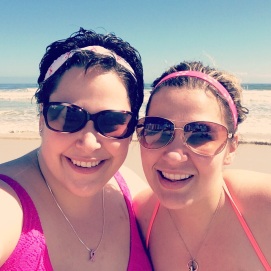